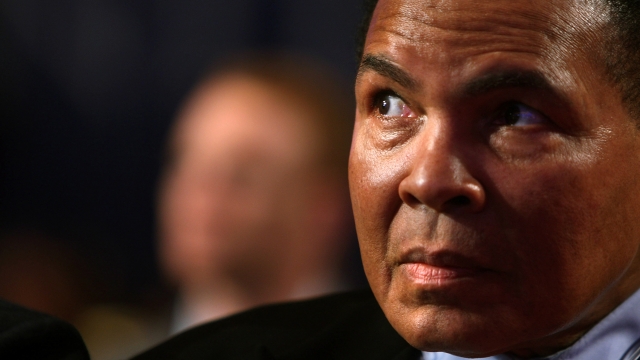 It will be a funeral fit for "The Greatest."

Family, friends and fans will get to bid farewell to Muhammad Ali later this week in his hometown of Louisville, Kentucky.

But the public will have multiple opportunities to pay their respects to the boxing champ on Friday. A procession through the city will begin at 9 a.m. local time and will travel down Muhammad Ali Boulevard and the neighborhood he grew up in. It will end at Cave Hill Cemetery where he'll be buried in a private ceremony.

The public funeral service will be held at 2 p.m. local time at the KFC Yum! Center with limited seating available for the public.

"Muhammad Ali was truly the people's champion, and the celebration will reflect his devotion to people of all races, religions and backgrounds," said family spokesman Bob Gunnell at a press conference Saturday.

An Ali family spokesperson said the legend planned his own funeral years ago. The public service will include representatives from many different religions and will be led by an imam.

Those who can't make it to pay their respects can watch a live stream of the funeral on the Muhammad Ali Center's website.

A spokesperson said family and friends expected the legend to pull through like he had many other times after being hospitalized. However, it became clear later in the week that his condition was deteriorating.

Ali died Friday night at a Phoenix-area hospital of "septic shock due to unspecified natural causes." Ali had battled Parkinson's disease for more than 30 years. He was surrounded by close family in his final hours.

His daughter Hana tweeted Saturday that family members held Ali's hands and told him it was OK to let go. She said: "All of his organs failed but his HEART wouldn't stop beating. For 30 minutes...his heart just kept beating. No one had ever seen anything like it. A true testament to the strength of his Spirit and Will!"

This video includes clips from ESPN and images from Getty Images and features music from Chris Zabriskie / CC BY 3.0.