From Migrants To Refugees, Mexico's Shelters Struggle To Keep Up 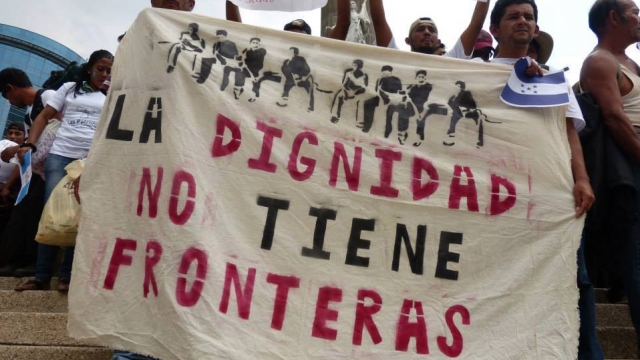 SMS
From Migrants To Refugees, Mexico's Shelters Struggle To Keep Up

By Karen Rodriguez
July 11, 2016
Mexico's refugee crisis is growing, and migrant shelters are having to adapt.
SHOW TRANSCRIPT

"Migrant shelters in Mexico have had to adapt or reconfigure what they do. I say that we are no longer just shelters for immigrants but refugee camps as well," said Ramón Marquez, director of La 72.

Marquez gives humanitarian aid to migrants traveling through southern Mexico as director of La 72, a shelter in Tenosique, Tabasco.

Thanks to a recent crackdown on immigration, more and more migrants from Central America are staying in Mexico instead of moving on to the U.S. border, and that's changing the way migrant shelters like La 72 operate.

Tenosique is about 60 miles from the Mexico-Guatemala border. That's a main crossing point for migrants because it's one of two cities with a train station near the border. Those migrants are mostly Central Americans fleeing organized crime, gang violence and political unrest in El Salvador, Honduras and Guatemala.

La 72 is located near the train tracks. Three years ago, the train "La Bestia" would carry hundreds of migrants toward the U.S. while 20 or 30 stayed behind at the shelter.

But in the summer of 2014, the Mexican government started regularly raiding the train. The raids were part of Programa Frontera Sur, or the Southern Border Program, an executive order signed by Mexico's President Enrique Peña Nieto.

"But now the train comes and 50 leave and 150 stay, that's the difference. The roads are literally taken by authorities and controlled by the Mexican National Immigration Institute," Marquez said.

In three years, Mexico has increased the number of Central American migrants it deports by 78 percent — surpassing the U.S. — and the number of migrants applying for asylum continues to grow. But Mexican immigration agencies don't have the resources to deal with the flow.

SEE MORE: More Undocumented Immigrants Have Left US Than Entered Since 2007

Migrant shelters and human rights organizations have become some of the main providers of legal help for migrants. Last year, La 72 partnered up with Asylum Access to help fulfill the demand.

"The last recount that we did, we have 110 people who are soliciting refugee status at La 72 right now. Last year our average was 60 people," Marquez said.

Even with help, the application process for asylum is long and difficult for both migrants and shelters.