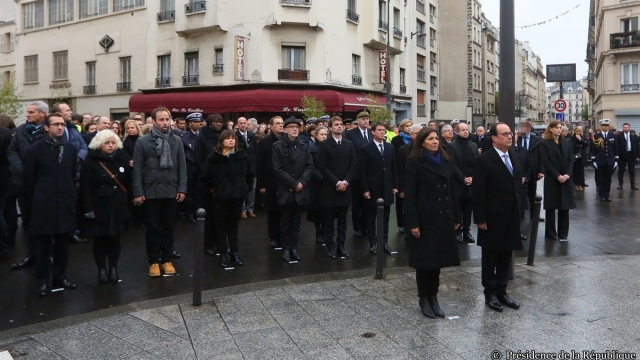 SMS
One Year After The Paris Attacks, France's State Of Emergency Remains
By Ethan Weston
By Ethan Weston
November 13, 2016
France has been under a state of emergency since the Paris attack last year. It could be extended again.
SHOW TRANSCRIPT

Sunday marks the one-year anniversary of the Paris terrorist attacks that killed 130 people.

And while all of France is honoring the victims of the attack, there was some unexpected news — France's yearlong state of emergency could be extended again.

"It is difficult at this stage to end the state of emergency, especially as we are about to begin a presidential election campaign in a few weeks when public meetings will be held. We need to protect our democracy," French Prime Minister Manuel Valls told the BBC.

The state of emergency was declared the same night as the attacks and was extended first in February and again in July. It originally was only supposed to last two weeks.

SEE MORE: Thousands In France Are Protesting Against A Longer State Of Emergency

The state of emergency allows French security forces to perform warrantless searches. And it has been used not only against terrorist cells, but also to break up protests.

Protesters have called the state of emergency a government "coup," and Muslim and human rights groups say it's discriminatory against France's Muslim population.

But a poll from the French Institute for Public Opinion in June found the majority of people either liked the state of emergency as it is now or wanted it to be even stronger.