France Likely To Close Over 100 Mosques It Says 'Preach Hatred' 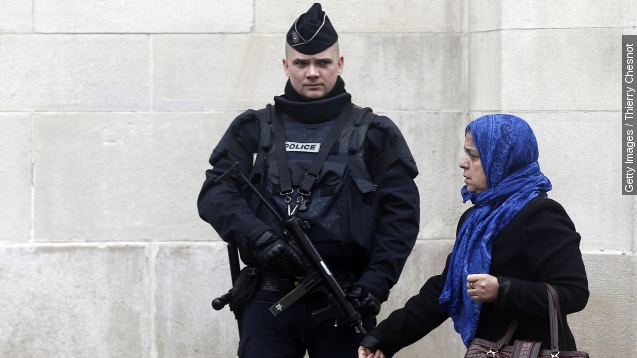 SMS
France Likely To Close Over 100 Mosques It Says 'Preach Hatred'
By Grant Suneson
By Grant Suneson
December 2, 2015
France is on the verge of shutting down more than 100 mosques it says are operating illegally or preaching hatred. And a leading imam is on board.
SHOW TRANSCRIPT

France is planning on shutting down dozens of mosques, and a top Islamic leader is staunchly supporting the move.

Hassan El Alaoui, who's in charge of all Muslim prison chaplains in France, told Al Jazeera anywhere between 100 and 160 Muslim worship centers will be closed.

He added that the mosques would be shuttered "because they are run illegally without proper licenses, they preach hatred or use takfiri speech," meaning they denounce other Muslims for not being truly adherent to the Quran.

The crackdown on extremist speech would affect roughly 4 to 6 percent of the countries 2,600 total mosques. Three have already been closed following the Nov. 13 attacks on Paris that left 130 people dead.

But while some Muslims like El Alaoui are concerned about the rhetoric being used at mosques, others are concerned closing houses of worship infringes on civil liberties.

In France, emergency powers, like those enacted after the Paris attacks, are supposed to last just 12 days. But the Senate voted to extend that period to three months. Since that vote, police have searched over 2,200 homes and detained more than 200 people.

The director of Amnesty International's European program said the powers are only supposed to be used in the case of an imminent threat but that "much more of this was preventative and speculative rather than linked to intelligence on [the attacks]."

RTL reported a 32-year-old man was arrested and sentenced to a year in prison all within a week for justifying the attacks, and an 18-year-old will face similar charges for comments he allegedly made on Twitter.