Former President Carter Gets Attention For Stating The Obvious 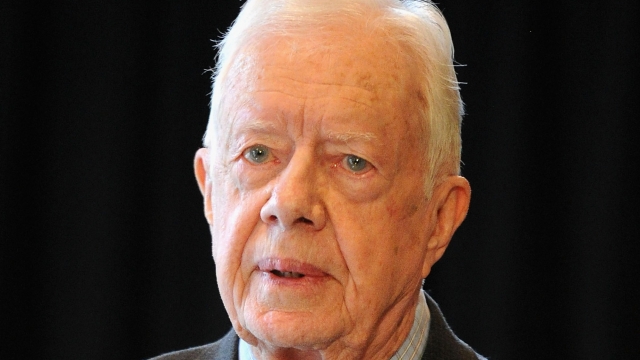 "Hillary Clinton has my support," former President Jimmy Carter said in a video message at the Democratic National Convention in July.

Former President Jimmy Carter's announcement last month wasn't surprising given that he's a Democrat. But it's what he said while reiterating his support for Clinton on Monday that's now getting attention.

Carter told the Associated Press, "It's been an exciting and unprecedented kind of campaign this year, and unfortunately, the way it's turned out, both choices in the major parties are quite unpopular."

Conceding his party's candidate is unpopular is certainly honest and might sting a little for the Clinton campaign. But he's right.

Although a recent CBS News poll shows Clinton leading Trump in two key swing states — Florida and New Hampshire — the majority of voters surveyed in those states said they don't trust her.

And the majority of voters in those same states said they don't think Trump has good temperament and judgment.

According to a recent Pew Research Center poll, 45 percent of registered voters said they thought Clinton would be a "poor" or "terrible" president, compared to 31 percent who said she'd be a "good" or "great" president.

Fifty-five percent of registered voters said Trump would be a "poor" or "terrible" president, while 27 percent said he'd be "good" or "great."

Although his statement was quite blunt, Carter did make it clear he feels there's one obvious choice for president. He said, "I don't have any doubt that one of the candidates is better qualified than the other."

In true Jimmy Carter fashion, the 91-year-old reportedly put the kibosh on any more political talk and turned his attention to one of his greatest passions — Habitat for Humanity.