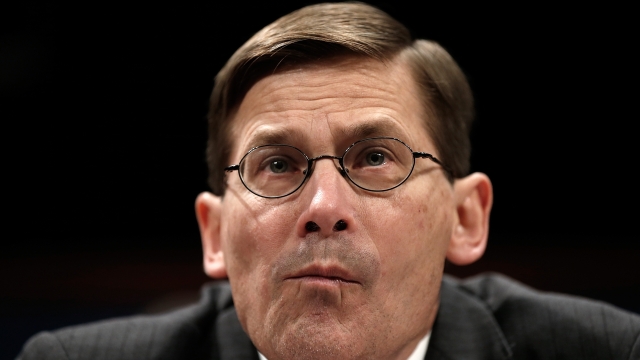 SMS
Former CIA Director Says Trump Could Be A Threat To National Security
By Lindsey Pulse
By Lindsey Pulse
August 5, 2016
In an op-ed for the New York Times, Michael Morell wrote that character traits and lack of experience make Trump unfit to run a country.
SHOW TRANSCRIPT

The former director of the CIA believes Donald Trump could be a threat to national security if he is elected president. Instead, he believes Hillary Clinton is highly qualified to be commander in chief.

Michael Morell, who retired from the CIA in 2013, released an op-ed in The New York Times on Friday citing several reasons he believes a Trump presidency would be detrimental to the safety of the U.S.

SEE MORE: Are White Voters Enough To Get Trump The White House?

In the op-ed, Morell said he spent four years working with Hillary Clinton during her run as secretary of state. He hailed her leadership during that time, saying she was "prepared, detail-oriented, thoughtful, inquisitive and willing to change her mind if presented with a compelling argument."

Morell said that in "sharp contrast" to Clinton, Trump's character traits and lack of experience in national security show he's not fit to run a country. He said Trump's call to bar all Muslims from the U.S. would undermine safety, not help it.

We've noted Trump's Russia-friendly policies before. In July, his campaign successfully pushed to keep the Republican party from adding a platform amendment that proposed giving weapons to Ukraine to fight Russian forces in the disputed region of Crimea.

SEE MORE: Clinton's Latest Endorser Is Huge, Even If You Don't Know Who He Is

The op-ed serves as his first public endorsement of a presidential nominee.

This video includes images from Getty Images and clips from C-SPAN, the Richard Nixon Foundation and Donald J. Trump for President Inc.