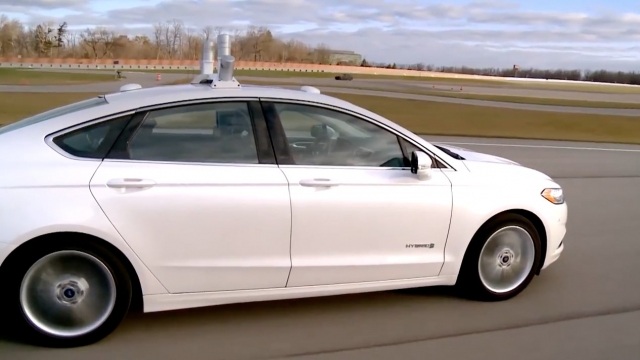 By Ryan Biek
August 17, 2016
Ford announced a timetable for the release of its self-driving vehicle and the initial goals for the company in the driverless industry.
SHOW TRANSCRIPT

Within five years, Ford plans to have a self-driving car on the market. And the company says it'll come without a steering wheel or pedals.

You might not be able to own one of these unnamed models right away, though. Ford announced the car will largely be used for ride-hailing and ride-sharing.

Depending on where you live, you might not be able to hail one anytime soon, either. It's reported that the cars will initially be offered in cities with pre-mapped zones laid out for driverless cars.

Ford noted in a press release its journey into research of self-driving cars started in 2005 with an autonomous vehicle challenge led by the defense agency DARPA.

But in many ways, Ford's latest announcement isn't too shocking. It seems every major car company — and several tech giants — have a stake in some upcoming autonomous vehicle.

Nissan has promised to be selling autonomous cars in dealerships by 2020. And Google's parent company is teaming up with Fiat Chrysler to test self-driving minivans.

Tesla may be the most recognizable name in the field. It's promised to be the first company to sell a fully driverless car.

But the company has been scrutinized following a fatal crash in May involving a Tesla vehicle that had its autopilot system engaged.

That crash has led the U.S. Transportation Department to review its safety rules regarding driverless tech, but at the moment, companies like Ford are working without clear guidelines from the government on what their cars will need to include.