For Nyquist, The Kentucky Derby Ends, And The Pressure Begins 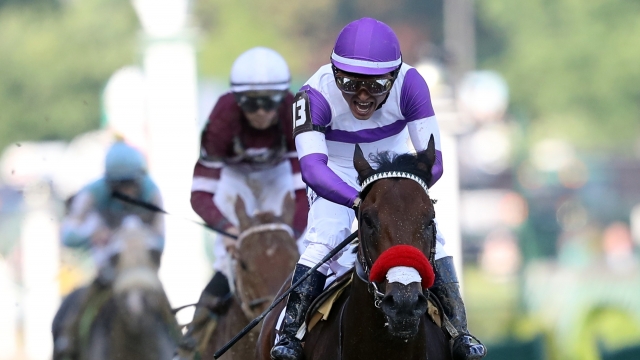 The fastest two minutes in sports is over, and Nyquist is the 2016 Kentucky Derby champion.

"And Nyquist is still unbeaten! He has won the Kentucky Derby!" said NBC announcer Larry Collmus as Nyquist crossed the finish line.

Nyquist was the clear favorite before the race, and he didn't disappoint, holding off Exaggerator to maintain his perfect career record.

The 3-year-old colt's win comes with a garland of roses and over $1.5 million in prize money; but added to that is a heaping spoonful of pressure.

After his derby win, Nyquist is now the only horse with a chance to win the Triple Crown — which he'll get if he wins at the Preakness Stakes and Belmont Stakes.

The pressure is even tougher this year, after American Pharoah won the Triple Crown in 2015, ending a 37-year drought to the delight of racing fans.

Following up a Derby win with a Triple Crown run is extremely difficult, and there are a few reasons why.

Winning three top-flight races in the span of five weeks is extremely challenging, of course. It's even tougher when you consider the last race, the Belmont Stakes, is the longest one of them all at a mile-and-a-half.

And it's not like all of Nyquist's competitors will have to run the same grueling schedule. There are usually a few colts who sit out the Preakness and come back for the Belmont, rested and ready to play spoiler.

But that doesn't mean Nyquist won't be able to prove the neigh-sayers wrong. His run for glory starts at the Preakness Stakes on May 21.

This video includes images from Getty Images and clips from the Kentucky Derby.