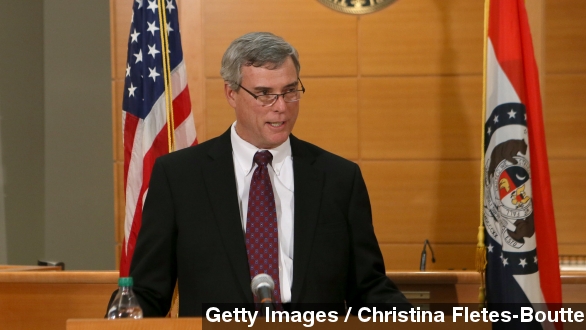 St. Louis County prosecutor Bob McCulloch has given his first press interview since Nov. 24, when he announced the grand jury's decision not to indict Darren Wilson for the controversial shooting of Michael Brown.

In an interview with KTRS, McCulloch explained some of his decisions about the grand jury proceedings — including the fact that some witnesses lied under oath about what they saw.

McCulloch referenced one witness in particular — Witness 40, identified by The Smoking Gun as Sandra McElroy — whose testimony was closely aligned with Wilson's account of the incident. Her story was picked apart by both prosecutors before the grand jury, and the media after the decision went public.

McCulloch says McElroy wasn't the only witness who fabricated their account of the shooting; he insists the grand jury used physical evidence to discount all falsified testimony, including McElroy's. The prosecutor also said he doesn't plan to bring perjury charges against any witnesses.

In the days after the grand jury trial, McCulloch has been faced with many complaints and accusations of bias. At least one Missouri lawmaker is calling for an investigation into his handling of the Michael Brown case.

During the radio interview, McCulloch also defended his decision to release the grand jury's results at night, saying there wouldn't have been a good time to make the information public.