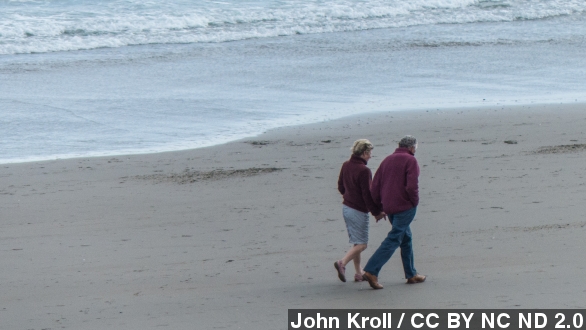 The adage "young at heart" might actually mean longer life spans for seniors, according to a new study. (Video via CBS Films / "Last Vegas")

Published Monday in JAMA, the study followed about 6,500 British adults older than 52 for more than eight years each, on average.

When participants enrolled in the study, researchers simply asked them, "How old do you feel you are?"

Andrew Steptoe told WCBS, "People who felt younger than their real age were more likely to survive over the next eight years or so, compared with those who felt older."

The difference in fatalities was significant, especially among adults with cardiovascular disease.

So much so that participants who said they felt older were more than 40 percent more likely to die in the next eight years. (Video via YouTube / LoftusHealthRec)

That's compared to people who said they felt three or more years younger than they actually were.

Study results remained the same even when factors like education, income, gender, ethnicity and previous illnesses were controlled, according to the Los Angeles Times.

Researchers believe the difference lies in people's outlooks about their health and aging.

According to Medical News Today, the authors hypothesize that a "greater resilience, sense of empowerment and will to live" might explain the positive health benefits of believing that age is just a number.

Because perceived age can change, researchers are now considering that positive messages about aging might actually increase longevity for seniors.