We're Seeing Less Violence, So Why Is America More Afraid? 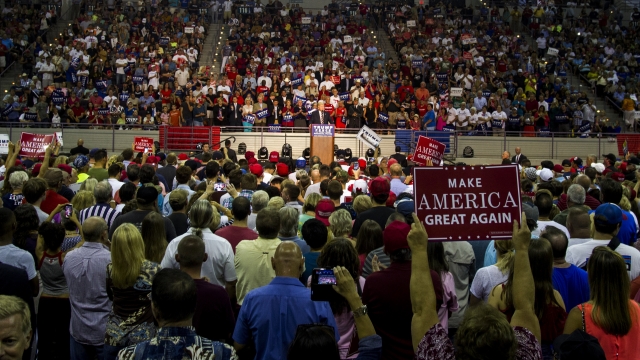 Why are Americans so afraid? About half the people in the country say they're afraid of being the victim of a terror attack or violent crime. Those fears are up from a few years ago. Today, as many people are afraid of terror and violence as were right after 9/11.

But let's look at the facts. Violent crime is at historic lows and has been dropping for decades. As for the threat of terrorism, things that are more likely to kill you than an Islamic terror attack include a lightning strike, a toddler shooting you, or falling furniture.

So why the fear? Well, one thing comes to mind.

Polling data shows us people who support Donald Trump are disproportionately more fearful than other Americans. Trump supporters are far more afraid, even if sometimes they don't know why.

The fear of unknown outsiders is central to Trump's campaign. Even though immigrants commit fewer crimes on average than other Americans do, Trump’s most popular policy is a literal wall that he says will keep out foreigners and keep his supporters safe. Some perspective here: About 10,000 Americans die at the hands of drunk drivers every year, but these cases are not the concern of Donald Trump — he hasn't talked about them. What he is worried about is a single death, in which an undocumented immigrant was the person behind the wheel — and which Trump can’t stop talking about, as he did at the Republican National Convention.

And if you think Trump and his campaign team don't know the actual facts, well, you're wrong.