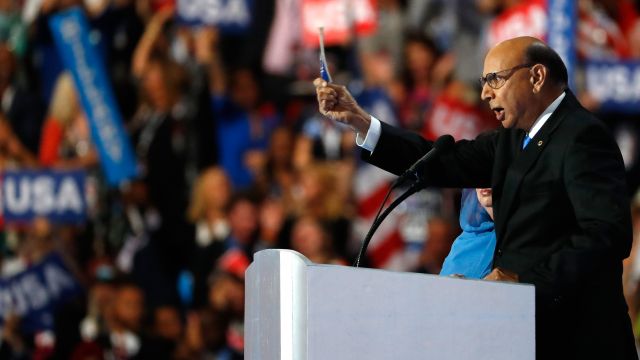 SMS
Father Of Slain Muslim US Soldier Has A Question For Donald Trump
By Zach Toombs
By Zach Toombs
July 28, 2016
U.S. Army Capt. Humayun Khan was killed by a car bomb in Iraq. Donald Trump's Muslim ban would've kept him from entering the U.S. at all.
SHOW TRANSCRIPT

Humayun Khan was a U.S. Army captain who died serving his country. He was also a Muslim. And his father has a question for Donald Trump.

"Have you even read the United States Constitution?" Khizr Khan asked Trump at the Democratic National Convention. "I will gladly lend you my copy. In this document, look for the words 'liberty' and 'equal protection of law.'"

Humayun Khan was born in the United Arab Emirates and was awarded the Bronze Star and Purple Heart.

SEE MORE: Trump Adviser Calls For All Muslims On Terror Watch List To Be Tagged

"Hillary Clinton was right when she called my son the best of America," Khizr Khan said. "If it was up to Donald Trump, he never would've been in America."