Fans Are Already Deciding Who Should Replace Michael Strahan On 'Live' 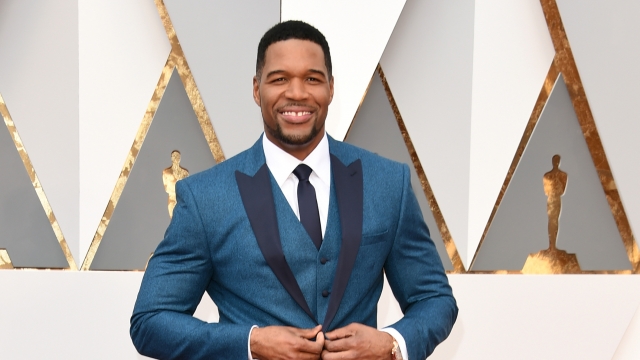 By Katherine Biek
April 19, 2016
ABC announced Tuesday Michael Strahan is leaving his job as co-host of "Live with Kelly and Michael" for a full-time gig on "Good Morning America."
SHOW TRANSCRIPT

Michael Strahan is going to have to start setting his alarm for even earlier each morning, because he's now joining ABC's "Good Morning America" as a full-time co-anchor.

The NFL Hall of Famer has made twice-weekly appearances on ABC's morning show since 2014, usually interviewing celebrities and helping out with some of the show's lighter segments.

The schedule allowed Strahan to still co-host "Live with Kelly and Michael" five days a week with Kelly Ripa.

"I am Michael Strahan, and I don't know who my new co-host is today," Strahan said on an episode of "Live with Kelly and Michael."

Unfortunately, his full-time job on "GMA" means Strahan will have to exit his role as a host for "Live," since the two shows air back-to-back and are filmed in different buildings.

And that's what fans seem to be most upset about, with many expressing their gut-wrenching disappointment on Twitter.

Others were able to move past the news to start pitching ideas of who should join Ripa as a new co-host. Many seem to be in favor of Neil Patrick Harris.

Whoever does end up getting chosen by the network will have some big shoes to fill, though.

Strahan began hosting "Live" in 2012 after Regis Philbin left. And together, he and Ripa won a Daytime Emmy for outstanding entertainment talk show host in 2015.

ABC has not yet announced when Strahan's last day on "Live" will be, but the search for a new co-host is expected to start in the fall.