Expect Siri To Steal The Spotlight At Apple's WWDC 2016 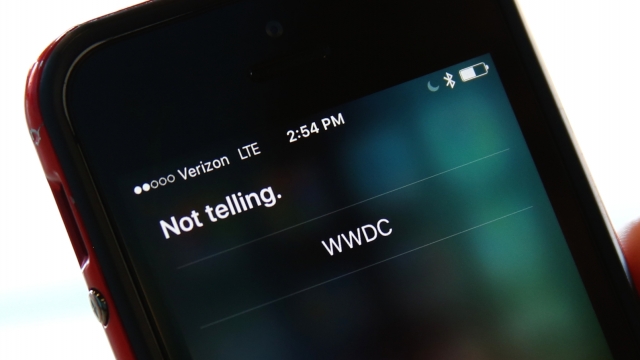 Siri's not giving any hints about what to expect at Apple's developer conference, but rumor has it the sassy voice assistant herself will be getting some pretty exciting updates.

For instance, there's a good chance developers will be walking away with her software development kit, or SDK for short. With that tool, developers can finally make Siri interact with third-party apps and services.

It's rumored Apple will eventually turn Siri into an Alexa competitor — that's Amazon's speaker-looking voice assistant. Giving developers the Siri SDK is a crucial step in making her more like the Echo.

There's a slight chance Apple could also announce some refreshes to its MacBook Pro and MacBook Air; both are overdue for updates. At the very least, Apple could put a fresh set of processors in the machines — hopefully resulting in zippier performance.

The operating system running on those Macs is far more likely to be getting considerable changes. This could include Siri integration — so you could talk to Siri on your Mac like you would on your iPhone.

OS X has had that name for a while now. To keep in step with the times, some are speculating Apple could rename the Mac OS to — wait for it — MacOS.

If you're an Apple Watch wearer, a big fan of your Apple TV or one of the many iPhone users, be glad. Their tvOS, watchOS and iOS platforms could be getting a few updates, too.

Services like Apple Pay, iCloud, Apple Music and iMessage may also see changes. And Apple's App Store has already seen some tweaks that could be additional incentives for developers to make apps for Apple products.

Starting this fall, the company will open up all of its app categories for subscriptions. And starting June 13, there will be a new revenue split for those subscriptions. The new split will give developers 85 percent of subscription profits (rather than 70 percent) after someone's subscription to an app passes the one year mark.