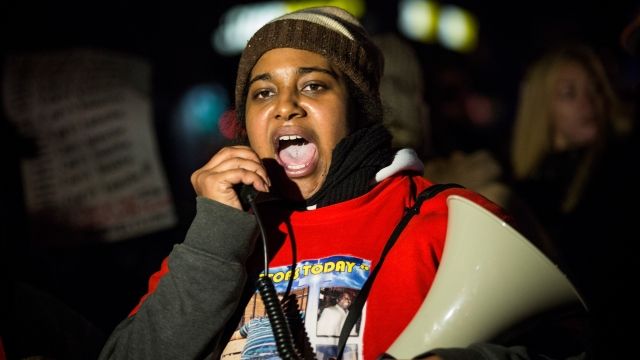 The daughter of Eric Gardner is going after the Clinton campaign in response to private email conversations WikiLeaks published.

Those conversations are part of the latest batch of hacked emails from Clinton campaign chairman John Podesta.

The article was shared with Clinton staffers before it was published. Her press secretary Nick Merrill asked: "I know we have Erica Garner issues but we don't want to mention Eric at all? I can see her coming after us for leaving him out of the piece."

Clinton's staffers pointed out that Garner did not die from gun violence. Eric Garner died after a New York City police officer used an illegal chokehold while making an arrest.

Erica Garner criticized the campaign on Twitter in a series of tweets, writing in part, "These people will co opt anything to push their agenda."

But discussion of the March 2016 op-ed wasn't the only time Eric Garner's name came up in Podesta's emails. In a December 2014 email thread with businessman Herbert Sandler, Podesta seems to imply he did not initially think the New York City Police Department's actions were excessive.

Sandler wrote: "I saw no threatening gestures by Garner which suggested the need to take him down. Even if the choke hold were not illegal, the actions by the four officers was clearly excessive." Podesta's responded by saying Sandler should "go back and look at the whole film rather than a six second clip."

As of Friday morning, the Clinton campaign has not confirmed the authenticity of any of the emails WikiLeaks published.