Eric Trump on David Duke: This Guy Does Deserve A Bullet 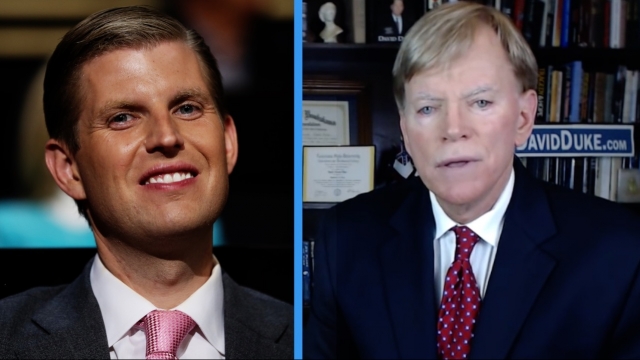 Donald Trump's son Eric wants voters to know he finds Trump supporter and former Ku Klux Klan grand wizard David Duke "disgusting" — apparently, so much so that he agreed with a talk radio host who said Duke deserves a "bullet in the head."

"If I said exactly what you said, I'd get killed for it, but I think — I think I'll say it anyway: The guy does deserve a bullet. I mean, these aren't good people. These are horrible people," Eric Trump said on Denver's talk radio 630 KHOW.

Eric Trump was on the show Thursday when the host asked him about political opponents and the media apparently tying Donald Trump and his campaign to white nationalists.

"This is the M.O. of the DNC. ... You know, they said this at the beginning: 'This is how we're going to discredit Donald Trump — by going after him and saying that he's sexist.' I mean, these are our politicians, and that's why I think I said before, I'm disgusted — I'm disgusted by, you know, just this process," Eric Trump said on the show.

Duke is currently running for the U.S. Senate in Louisiana. He has continually expressed support for Donald Trump, even releasing a robocall in August.

The Trump campaign denounced the call, Duke and "any group or individual associated with a message of hate."

That came after some criticized Donald Trump for his response in February to a question about whether he would disavow Duke and the KKK.

"You wouldn't want me to condemn a group that I know nothing about. I have to look. If you would send me a list of the groups I will do research on them," Trump said.

Hours later, Donald Trump said he had a bad earpiece and "could hardly hear" what he was asked. He had disavowed Duke the week beforehand, according to NBC.

Eric Trump's comments came just hours after Duke made headlines for comments he made during a debate Wednesday night.