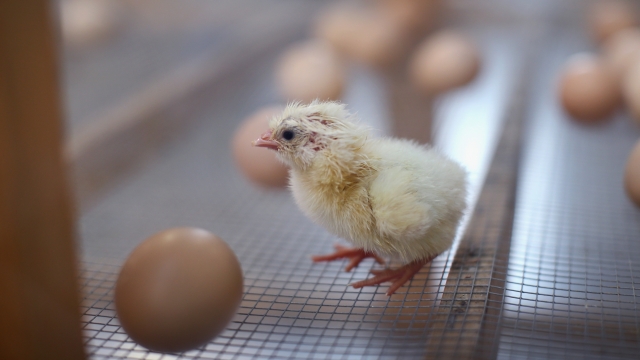 SMS
Egg Producers Pledge To Stop Grinding Up Male Chicks
By Ryan Biek
By Ryan Biek
June 12, 2016
You've probably heard about female chickens confined to tiny cages, but you might not know about the gruesome practice male chicks are subjected to.
SHOW TRANSCRIPT

You've probably heard about female chickens being kept in poor conditions, laying eggs in cages too small for them to spread their wings. But American hatcheries pledged Thursday to end a different controversial practice —  one involving male chickens.

Across the industry and the world, when male chicks are born to egg-laying hens, they're immediately slaughtered. The advocacy group that brokered the deal in the U.S. notes male chicks are often put through what's basically a grinder.

These male chicks can't lay eggs, nor were they bred to grow large enough, or quickly enough, to be sold as meat.

But United Egg Producers, a group that speaks for hatcheries that turn out 95 percent of U.S. eggs, has pledged to stop culling by 2020, or when it's "economically feasible" and an alternative is "commercially available."

The pledge isn't to let these male chicks live, though. It's largely to keep them from being born.

Researchers in the Netherlands have been working on technology that could identify the sex of a chicken on the ninth day of incubation. This would allow farmers to terminate males before they hatch.

The U.S. may become one of the leaders in effectively eliminating culling. An anti-culling bill was presented to Germany's parliament but voted down in March.

According to The Guardian, more than 3 billion male chicks are killed within hours of hatching each year.