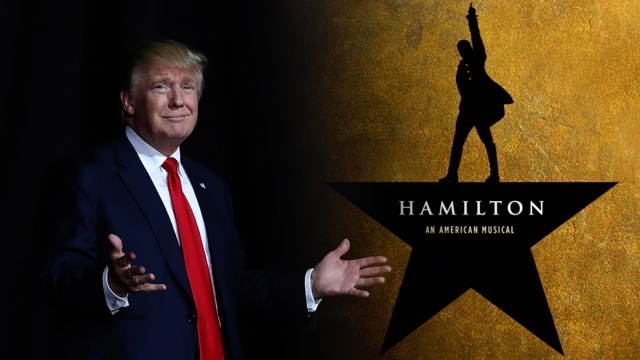 "Vice President-elect Pence, we welcome you, and we truly thank you for joining us here at 'Hamilton: An American Musical,'" said actor Brandon Victor Dixon.

Pence saw the show Friday night. When he entered the room, the audience greet him with a mixed chorus of boos and cheers.

After the show, the Hamilton cast returned to the stage. Dixon, who plays Aaron Burr, spoke directly to the vice president-elect.

He said, "We are the diverse America who are alarmed and anxious that your new administration will not protect us."

If you watch the whole video, the cast had no words of ill-will for the Indiana politician. Rather, Dixon voiced concern for how people of color and other minority groups will be treated under the Trump administration.

Dixon also asked how the administration would uphold their inalienable rights and protect the planet.

The cast's address echoes the concerns of many since the election. Pence has faced criticism for his strong opposition of gay marriage. He's also opposed bills that would give certain protections to members of the LGBTQ community.

During his campaign, Trump famously proposed to deport millions of immigrants and called for a ban on Muslims entering the country. More recently, he's faced criticism for several cabinet picks.

In a Saturday morning tweet, Trump accused the cast of harassment, saying, "This should not happen!" In a separate tweet, he said the cast was "very rude" and should "apologize."

And Dixon swiftly responded with a tweet of his own, saying, "Conversation is not harassment."

Dixon said on stage that night, "We truly hope that this show has inspired you to uphold our American values and to work on behalf of all of us."