Hispanics In Florida Might Be Warming Up To Donald Trump 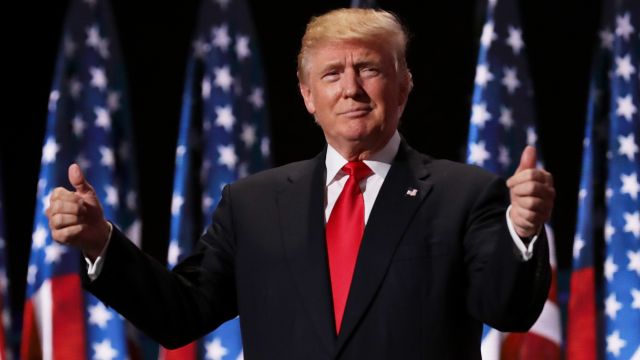 SMS
Hispanics In Florida Might Be Warming Up To Donald Trump
By Matt Picht
By Matt Picht
August 24, 2016
A new poll has Donald Trump leading Hillary Clinton by two points in Florida. Pollsters credit his higher numbers with Hispanics.
SHOW TRANSCRIPT

The ultimate battleground state continues to be a battleground. A new poll shows Florida is leaning toward giving its 29 electoral votes to Donald Trump over Hillary Clinton.

The poll, conducted by Florida Atlantic University, found Trump leads Clinton 43 percent to 41 percent. Trump is also winning over 47 percent of the state's independent voters, compared to the 26 percent of independents favoring Clinton.

It's a shot in the arm for Trump's supporters in Florida; the GOP candidate has been trailing Clinton in the state since the beginning of August. RealClearPolitics' polling average currently has Clinton up 3.6 percentage points in Florida, though the state is still a toss-up.

Part of the reason Trump is staying competitive in Florida is his bolstered numbers with Hispanics in the state. Trump only has 40 percent of the state's Hispanic vote, but that's a significantly higher margin than he's getting nationally.

Monica Escaleras, director of the university's Business and Economics Polling Initiative, told researchers: "The race between Clinton and Trump among Hispanics in Florida is closer than it is nationally. Some of that is probably the Cuban vote. Trump’s support among Latinos in Florida is helping him stay competitive."

The poll also has good news for the GOP when it comes to the upcoming Senate race. As incumbent GOP Sen. Marco Rubio and Democratic challenger Patrick Murphy head into their respective primaries, Rubio continues to lead Murphy 44 percent to 39 percent.