Donald Trump Opened Up About His Medical Records ... Sort Of 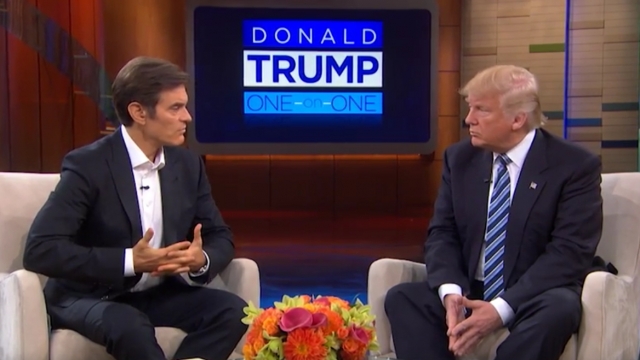 SMS
Donald Trump Opened Up About His Medical Records ... Sort Of

By Zach Toombs
September 14, 2016
The candidate handed a one-page summary of his medical records, prepared by the campaign, to the celebrity physician during a taping of his show.
SHOW TRANSCRIPT

Donald Trump discussed his medical records during a pre-taped interview with celebrity Dr. Oz on Wednesday. But the conversation only touched on parts of those records Trump wanted to talk about, specifically a one-page summary.

Oz had already said he wouldn't be pushing Trump on the issue.

"What if there are some embarrassing things in there?" Brian Kilmeade asked on his radio show.

"I bet you he won't release them. It's his decision. The metaphor for me is it's the doctor's office, the studio," Oz said. "So I'm not going to ask him questions he doesn't want to have answered."

Trump reportedly set a goal of losing 15 to 20 pounds in Wednesday's interview.

Ironically, Oz came under pressure from Congress in 2014 for his wide array of weight loss miracle pills that he admitted did not pass "scientific muster."

Trump's team has tried to keep the focus on Hillary Clinton's health after her pneumonia diagnosis. Trump's own health records still have not been made public in full.

Clinton's team has instead called attention to Trump's tax returns, which he hasn't released, unlike every major party nominee over the last few decades.