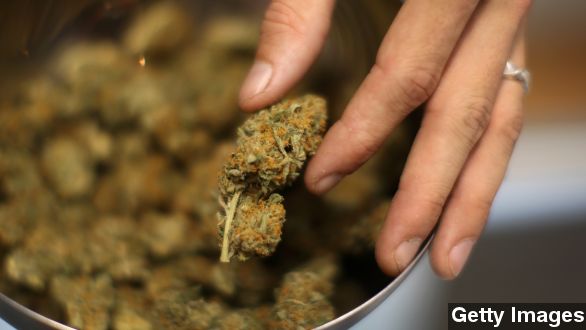 Deaths from prescription drug overdoses have spiked dramatically since the 1990s. Now new research suggests legal medical marijuana might contribute to a decrease in those deaths.

The Centers for Disease Control and Prevention estimates more than half of the drug overdose deaths in 2011 involved pharmaceutical drugs.

But according to a study published in the journal JAMA, as much as 25 percent fewer people die from prescription drug overdoses in states that allow medical marijuana than in the states that don't.

The findings suggest those with chronic pain in states with legal pot could be turning to marijuana instead of prescription drugs, which require a higher dosage that might be more dangerous. (Video via CNN)

And as the Los Angeles Times notes, past research has already indicated patients who take prescription drugs together with medical marijuana can experience greater pain-killing effects.

But the researchers warn the study's results don't necessarily prove that people choose marijuana over prescription drugs in states that have legalized it.

And experts don't agree on the interpretation of the results, either. One medical expert tells Newsweek not many doctors are prescribing medical marijuana to begin with, even in states where it is legal. He says the results could have also been affected by regulations in states cracking down on prescription drug abuse.

The study comes just days after the Drug Enforcement Administration announced new restrictions on the prescribing of hydrocodone.

Federal officials believe these new regulations will help fight addiction to hydrocodone, which is one of the most prescribed and most abused prescription drugs in the U.S.

The federal government still classifies marijuana as a Schedule I drug, the most restrictive class. And its supposed benefits in treating pain due to health issues such as cancer are also still a matter of debate.

The study was conducted between 1999 and 2010, when medical marijuana was legalized in 13 states. Currently, that total comes up to 23, with more states expected to follow.