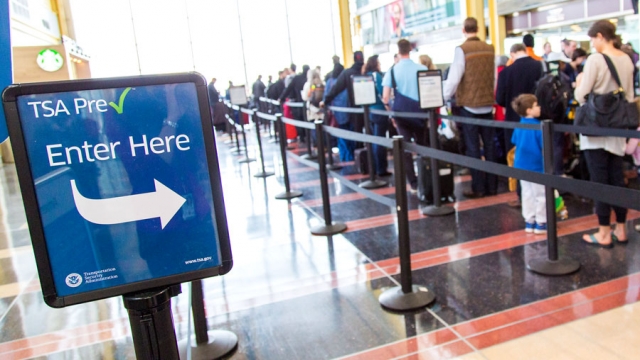 SMS
Do You Have What It Takes To Get On The TSA's PreCheck List?
By Leah Becerra
By Leah Becerra
June 24, 2016
There are a lot of hoops to jump through when applying for TSA PreCheck. No, really. The checklist is long, and so is the line.
SHOW TRANSCRIPT

You've heard others talking about it, praising how quickly they get through airport security, but what actually goes into becoming a Transportation Security Administration PreCheck flier?

Well, time and money. But here are the specifics:

As long as you're a U.S. citizen, U.S. national or lawful permanent resident, you can pay $85 to apply to become a PreCheck flier. But the money doesn't guarantee anything.

You'll have to visit an enrollment center for an in-person interview. These locations will usually accept walk-ins, but those with appointments get priority.

As of June, the TSA said nearly 16,000 people have been applying for PreCheck each day. So unless you want to kill an hour or two waiting at an enrollment center, it's probably best to set an appointment ahead of time.

Applicants will, of course, need to be background checked, but as part of the interview, they'll also need to be fingerprinted.

LoungeBuddy says everything the TSA collects during the application and interview processes will be cross-checked against intelligence databases, the government's watch list and the Centers for Disease Control and Prevention's list of people who aren't allowed to fly for health concerns.

Usually, applicants will find out if they were approved in about two weeks. And once they're OK'd, PreCheck status is good for five years.

If you're approved, great for you! You can speed through the TSA's security checkpoints as long as you're flying on one of these 16 airlines and flying out of a participating airport. You just need to remember to add your known traveler number, or KTN, when you book your flight.

This video includes clips from Transportation Security Administration and images from jayson lim / CC BY 3.0 and Shafiqa Naazira / CC BY 3.0. Music provided courtesy of APM Music.