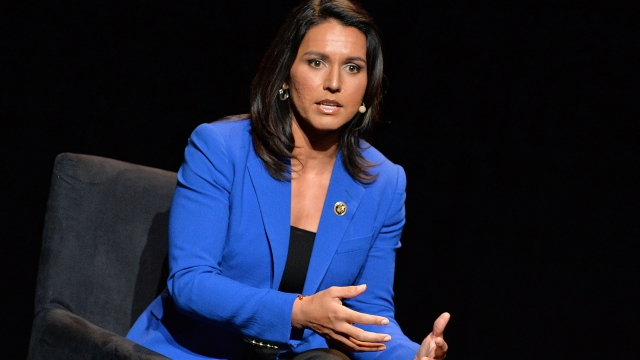 SMS
DNC Vice Chair Tulsi Gabbard Steps Down To Endorse Bernie Sanders
By Melissa Prax
By Melissa Prax
February 28, 2016
Gabbard didn't make it clear if she would be playing an active role in Sanders' campaign. The DNC has yet to comment on her resignation.
SHOW TRANSCRIPT

Presidential hopeful Bernie Sanders just got another endorsement, and it's from the Democratic National Committee's vice chair.

Rep. Tulsi Gabbard announced during a "Meet the Press" interview Sunday she would be stepping down from her DNC position to endorse Sanders.

Gabbard said her desire for a good commander in chief propelled her to make her decision.

"As a veteran and as a solider, I've seen firsthand the true cost of war," Gabbard said.

The Hawaii representative had reportedly clashed with DNC views in the past. In October, she said her invitation to the Democratic debate was revoked after she said there needed to be more debates.

Gabbard didn't make it clear if she would be playing a more active role in Sanders' campaign or simply endorsing it.

And as of Sunday morning, the DNC has not released a statement about her resignation.