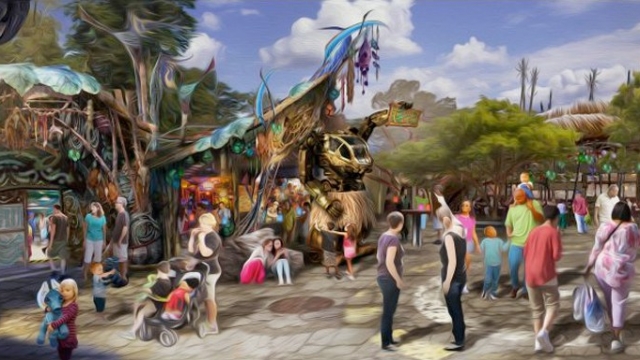 Soon, animals won't be the only ones living in Walt Disney World's Animal Kingdom theme park.

That's because residents of Pandora from the 2009 film "Avatar" are going to be taking up residence.

Disney isn't giving too much away with its photos, though.

One picture reveals what the land's restaurant will look like, while another shows Disney's concept for a "merchandise location."

What we didn't receive are any new visuals of the two "Avatar"-themed rides being built.

One of those attractions is the Na'vi River Journey, which sounds an awful lot like the Jungle Cruise ride in Walt Disney World's Magic Kingdom.

The other ride is called "Avatar Flight of Passage." It's official description reads, "Guests will fly over the jungles of Pandora on a Mountain Banshee."

When it comes to its theme parks, Disney is known for quickly capitalizing on its big money-making films, like "Frozen" and the "Star Wars" franchise.

And "Avatar," which pulled in an incredible $2.8 billion at the box office, definitely fits that bill. Plus, director James Cameron has a grand plan for four upcoming sequels, so Disney can milk "Avatar" land for many years to come.

No definitive opening date has been announced for the new "Avatar" addition, but Disney did say it would happen sometime next summer.