Disgraced Ex-Congressman Sat Behind Donald Trump At A Florida Rally 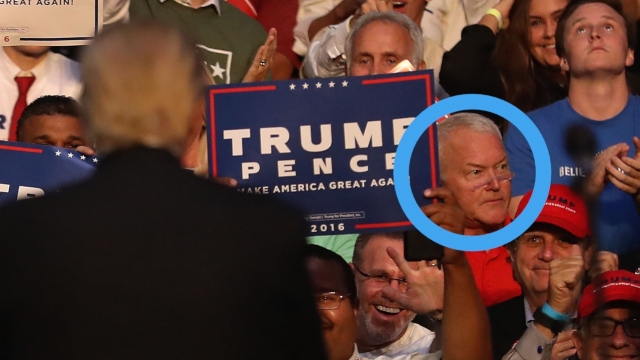 SMS
Disgraced Ex-Congressman Sat Behind Donald Trump At A Florida Rally
By Briana Koeneman
By Briana Koeneman
August 11, 2016
As Trump attacked Hillary Clinton for letting the Orlando shooter's father sit near her at a rally, a disgraced politician was sitting behind Trump.
SHOW TRANSCRIPT

"Wasn't it terrible when the father of the animal that killed the wonderful people in Orlando was sitting with a big smile on his face right behind Hillary Clinton?" Donald Trump said at a rally in Florida.

As Donald Trump slammed Hillary Clinton on Wednesday after Seddique Mateen, the father of the Orlando shooter, was seen sitting behind her at a recent rally, viewers quickly noticed a controversial person right behind him.

As you might know, Foley resigned from his position in 2006 amid allegations he sent sexually explicit text messages to underage congressional pages.

Shortly after the rally, Foley told the Sun Sentinel he was there and praised Trump's performance and ideas.

It's still unclear if Trump's campaign knew Foley was at the rally and was right behind the presidential candidate.

But as CNN pointed out, the row of seats directly behind the stage had "reserved" signs on them.

As for Clinton, her campaign immediately disavowed Mateen's support after he appeared behind her at her rally. A Clinton campaign spokesperson told reporters she "disagrees with his views and disavows his support."