Did SCOTUS Just Tip Its Hand With Abortion Ruling? 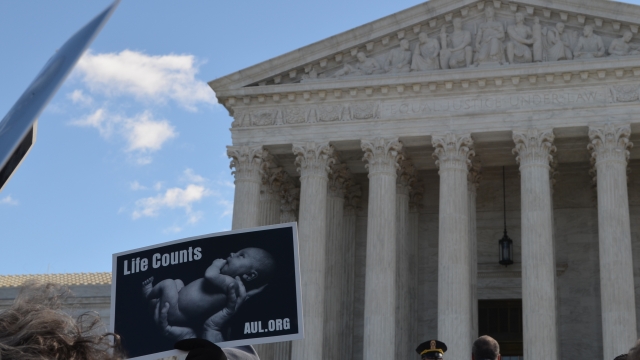 SMS
Did SCOTUS Just Tip Its Hand With Abortion Ruling?
By Cliff Judy
By Cliff Judy
March 4, 2016
The Supreme Court on Friday blocked a Louisiana law that's similar to the controversial Texas law it heard arguments over earlier in the week.
SHOW TRANSCRIPT

The U.S. Supreme Court has issued a decision on an abortion case, but not the one that caused protests this week in Washington, D.C.

In a 7-1 vote issued Friday, the Supreme Court blocked a Louisiana law requiring abortion doctors to have admitting privileges at nearby hospitals, a law that providers said forced some clinics to shut down.

That's very similar to the Texas law that justices just heard arguments over, which is arguably the most significant abortion case the Supreme Court's heard in a generation.

So naturally, the media interpretation of Friday's ruling has been a sign of things to come in the Texas case — saying the law was possibly "in peril," justices were "unwilling" to permit restrictions and noting abortion rights supporters treated this as "a positive sign."

But here's the actual order. It simply says the court made the ruling consistent with what it already did in the Texas case — blocking the restrictions until the court makes a ruling on whether they're constitutional.

So this could be a preview of the court's ruling. Or this may simply be the court doing its due diligence.

The Texas case appears to center on whether the justices believe the hospital admitting privileges — a concept other states like Kansas have adopted — create an undue burden on providers. Supporters say the laws protect women's health, while opponents say they do no such thing and are politically motivated restrictions on abortion access.

Justice Anthony Kennedy — a swing vote on the court — questioned whether the Texas law encouraged more women to get abortions through surgery instead of simply taking pills.

The court is expected to issue its ruling in the Texas case — which will presumably affect the order for Louisiana as well — in June.