Did Joe Biden Argue Against The President's SCOTUS Nomination In 1992? 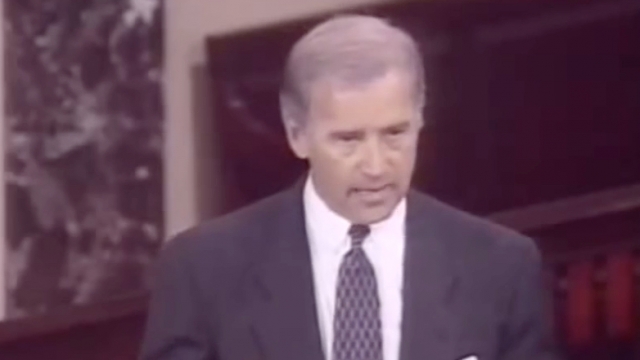 SMS
Did Joe Biden Argue Against The President's SCOTUS Nomination In 1992?
By Matt Moreno
By Matt Moreno
March 17, 2016
Joe Biden once advised George H.W. Bush against making a Supreme Court justice nomination in 1992 but didn't block the process.
SHOW TRANSCRIPT

"President Bush should consider following the practice of the majority of his predecessors and not, and not, name a nominee until after the November election is completed."

That was then-Sen. Joe Biden in 1992 speaking against George H.W. Bush nominating a Supreme Court justice in an election year.

This is Joe Biden today:

It would seem the vice president is taking a bit of a different stance now that it's President Obama's turn to name a Supreme Court justice during the last year of his presidency.

On Wednesday, Obama nominated Merrick Garland for the vacant seat.

"Of the many powers and responsibilities that the Constitution vests in the presidency, few are more consequential than appointing a Supreme Court justice," said Obama.

But Senate Majority Leader Mitch McConnell and others have spoken out about rejecting the president's nomination, no matter who it was, by citing the "Biden rule."

"Yesterday, the chairman of the judiciary committee and I personally reiterated to President Obama that we will observe the Biden rule," McConnell said.

But the White House doesn't seem too fazed by what's being taken as a contradiction from Biden. When asked about it, White House Press Secretary Josh Earnest cited Biden's record from that year.

"Joe Biden was chairman of the senate judiciary committee and ensured that Justice Kennedy got both a fair hearing and a timely yes or no vote. That's what we're asking the Senate to do," Earnest said.

The Republican-controlled Senate has so far said it will refuse to hold confirmation hearings for the new nominee.