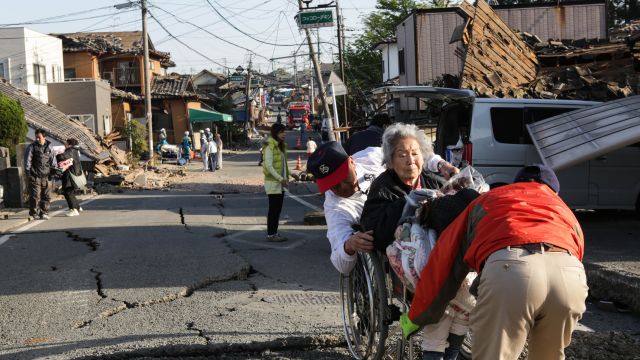 Saturday's quake also prompted a landslide and several aftershocks — the strongest of which measured at a 5.7 magnitude — again almost with the same epicenter.

So why is the same spot being hit repeatedly? Japan is in a region known as the Ring of Fire where tectonic plates make it susceptible to earthquakes.

Since the quakes, thousands have been evacuated and thousands more left without power.

The country has held emergency meetings since the first quake. On Saturday local time, the prime minister announced an intensive rescue effort as many are believed to be trapped under collapsed buildings.

A U.S. Department of State spokesman said the U.S. was willing to help. Japan's defense minister has reportedly told the country's Department of Defense to consider the offer.