Dallas Shooting: The Ethics Of Using A Robot To Kill 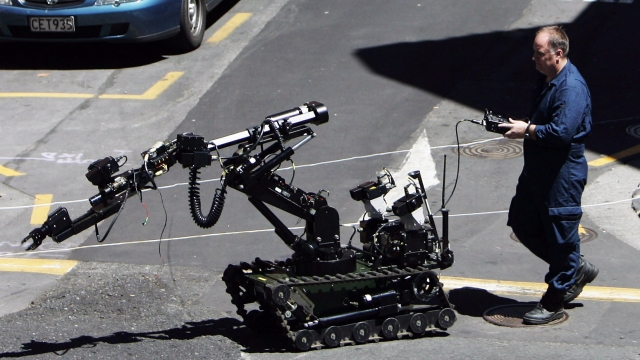 SMS
Dallas Shooting: The Ethics Of Using A Robot To Kill
By Ben Lawson
By Ben Lawson
July 9, 2016
The Dallas Police Department appears to be the first U.S. police force that has used a bomb robot to kill a suspect.
SHOW TRANSCRIPT

"We saw no other option but to use our bomb robot," said Dallas Police Chief David Brown in a press conference.

This was just hours after officers rigged a robot with an explosive device to take out the suspect in the Dallas protest shooting.

It's believed to be the first time a U.S. law enforcement agency has used a robot for lethal force, and it raises some serious ethical questions.

To be clear, it's not like a completely autonomous robot was released on the suspect. It was likely a bot like this one, which requires a human to operate the controls.

Police departments around the country use these kinds of robots to disarm explosives.

The military has used inspection robots in much the same way, and while the use of lethal force is rare, it's not exactly unprecedented.

A philosophy professor at California Polytechnic State University told The Daily Beast, "It doesn't seem fundamentally ethically different from another distance weapon (like a sniper rifle)."

At the same time, that professor asks why the robot couldn't be armed with some kind of nonlethal gas instead of an explosive.

That's basically the approach Albuquerque police took in 2014 when a subject had barricaded himself in a motel. They deployed "chemical munitions," and the suspect surrendered.

We don't know what materials were immediately available to the Dallas police during the standoff. Brown said in a press conference that using the robot kept officers safe.

"Other options would have exposed our officers to grave danger," he said.

Unmanned drones could be lumped into the same categories as armed robots. The military has been using those to administer lethal force for over a decade now, though that hasn't been without controversy, either.