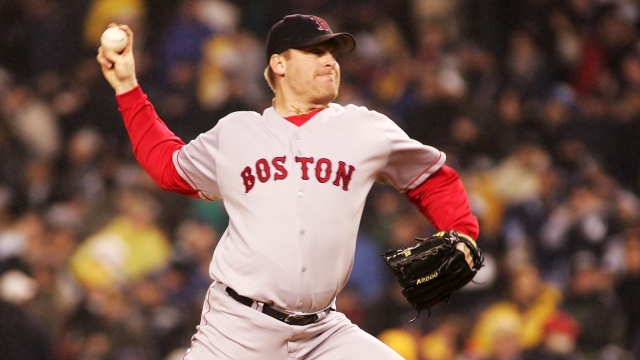 SMS
Curt Schilling Isn't Thrilled ESPN Cut Him From A Red Sox Documentary
By Matt Moreno
By Matt Moreno
May 2, 2016
Curt Schilling, an outspoken conservative, was fired by ESPN on April 20 after posting an image on Facebook that criticized gender-neutral bathrooms.
SHOW TRANSCRIPT

No story about the Boston Red Sox's historic 2004 World Series run is complete without Curt Schilling and his bloody sock ...

… except the one that aired on ESPN days after the sports network fired him.

During an airing of "Four Days in October," an ESPN "30 for 30" film, viewers noticed a segment about the former Sox pitcher was inexplicably missing from the movie.

Eventually, Schilling caught wind of the omission and fired back at his former employer on Twitter.

Schilling, an outspoken conservative, was fired by ESPN after posting an image on Facebook that criticized gender-neutral bathrooms. It wasn't Schilling's first controversial post on social media.

But a spokesperson from ESPN said the pitcher's absence from the documentary had to do with the previous program's length and nothing to do with his recent firing.

"When a live event runs long, it's standard procedure to shorten a taped program that follows. In this case, we needed to edit out one of the film's four segments to account for the extra length of the softball game."

This video includes clips from ESPN and SiriusXM and images from Getty Images.