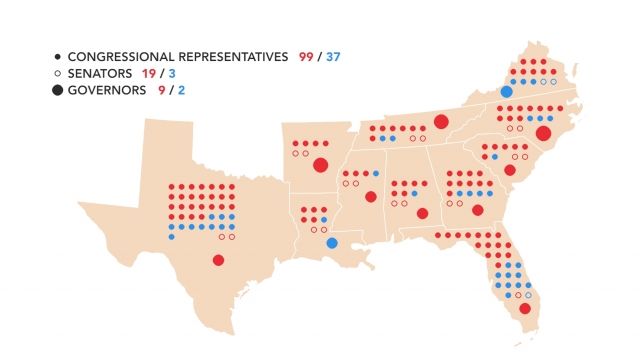 SMS
Could Southern Democrats Rise Again?
By Kate Grumke
By Kate Grumke
February 26, 2016
A former chairman of the Democratic National Committee says Democrats will need more than organization to be competitive again in the South.
SHOW TRANSCRIPT

Democrats have a persistent problem in the South. Since the civil rights era, the party has been losing political strength in the region.

In the former Confederacy, Democrats currently have less than a third of congressional seats, three senators, two governors and not a single state legislature. It's a problem the party is aware of.

"The Democratic party in every one of the 11 Southern states of the Confederacy are minority parties now," said Donald Fowler, former chairman of the Democratic National Committee. "They have difficulty in electing any statewide officials."

She was the last democratic senator in the Deep South, and media called it the extinction of the Southern Democrat.

The demise has at least something to do with race. Democrats started to lose ground among white voters in the South during the civil rights era. It's been a steady decline since.

But there are some reasons for Democrats to be hopeful. The South is the region where the most new people are moving, which could bring change. Between 2014 and 2015, the South saw an increase in population by almost 1.4 million people.

But it would take something huge for a massive political shift to come anytime soon.

And because Democrats have already captured almost all minority voters in these states, they'll specifically have to change white people's minds.

This video includes a Getty Image and music by MADS / CC BY 3.0.