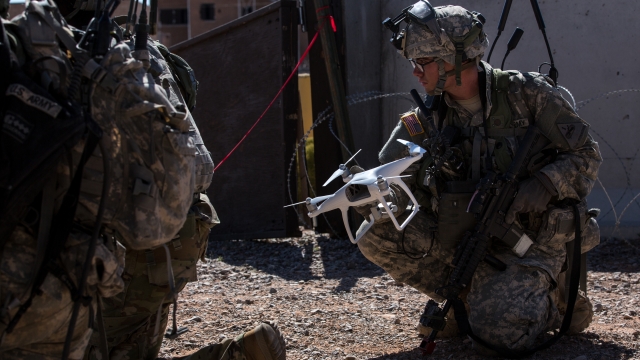 SMS
The Same Drone You Own Could Be Used As A Weapon In Conflict Zones
By Jake Godin
By Jake Godin
November 1, 2016
As drones proliferate the battlefield, soldiers need new methods to defend against any threat the devices may pose.
SHOW TRANSCRIPT

Drones are making their way onto battlefields, but governments aren't the only ones using them.

In most cases, these drones are used for one of two things: surveillance or propaganda.

In some instances, they're also used as improvised weapons.

Two groups have weaponized drones in Syria by using the devices to drop explosives.

ISIS has been known to rig its drones to explode. A drone downed in Iraq exploded, killing two Kurdish soldiers and injuring two coalition soldiers.

The U.S. has an answer to these drones: the Battelle DroneDefender. It shoots them down.

The DroneDefender uses two methods to take out the flying devices: It can either disrupt a drone's remote controls or its GPS data.

The U.S. has other methods for taking out small drones, but for now, that's classified.