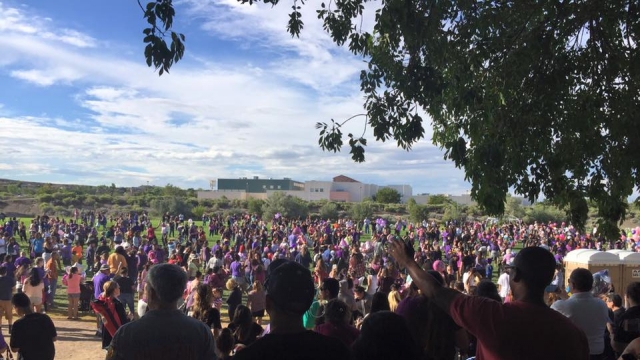 Members of the Albuquerque community gathered Sunday to celebrate the birthday of a 10-year-old girl who was killed last week.

Victoria Martens was found dead in her home by police. Three people are charged with her murder — her mother, Michelle Martens, her mother's boyfriend, Fabian Gonzalez, and his cousin, Jessica Kelley.

All three are facing charges including murder, child abuse and kidnapping. Gonzalez and Kelley are both being charged with rape, as well.

We want to warn you that the details of the case are graphic.

Police say Victoria's mother told them her daughter was injected with methamphetamine so she would be calm while Gonzalez raped her. Police say the girl was then strangled and stabbed. When police arrived, they found her partially dismembered body burning in a bathtub.

Gonzalez denied the claims as he was leaving the Albuquerque police station and told reporters that Kelley committed the crime.

Mugshots of Michelle Martens and Gonzalez show them with bruises on their face. They say those came from Kelley attacking them with an iron while Victoria's murder was taking place.

A judge set Martens' and Gonzalez's bonds at $1 million. KRQE reports that Gonzalez and Kelley both have lengthy criminal histories, but it doesn't appear Martens has been charged with a crime before.

Victoria was killed the day after her birthday, so members of the Albuquerque community decided to come together to throw a memorial birthday party in her honor.

There were balloons, face painting and horse rides, and many of the attendees wore purple because it was Victoria's favorite color. Attendees also released hundreds of balloons in honor of the girl.

A Go Fund Me page has also been set up in Victoria's memory. All the proceeds will be used as a college fund for her 8-year-old brother.