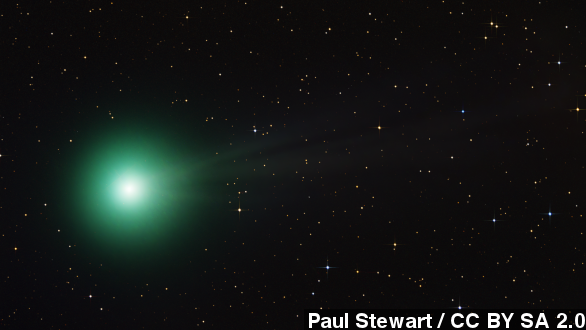 Want to ring in the new year with some amateur astronomy? Of course you do, and 2015 has you covered.

Comet C/2014 Q2, which was discovered just this past August, is going to be visible in the Northern Hemisphere for most of January.

The comet has been nicknamed "Comet Lovejoy" after its discoverer, Australian amateur astronomer Terry Lovejoy — though it's not to be confused with the four other comets he's discovered that also carry his name.

Sky and Telescope lays out the viewing details: the comet will be visible on New Year's Day and for the first weekend of January, though you might need some binoculars. Between Jan. 4 and 7, light from the moon will make it tougher to spot. After that, it should be visible with the naked eye for a few days, then visible with binoculars again for another week or so.

And if you aren't much of a stargazer and can only really recognize Orion's belt, that's fine.

The comet will be located near Orion during the best viewing periods, starting out below the hunter's feet on New Year's Day and gradually moving north.

If you still can't find it or if the weather gets in the way, The Virtual Telescope Project will livestream the comet's passing.

This could be the last time this particular comet comes close to Earth for 8,000 years, so, you know, see it while you can.