The College Football Arms Race Is Upon Us 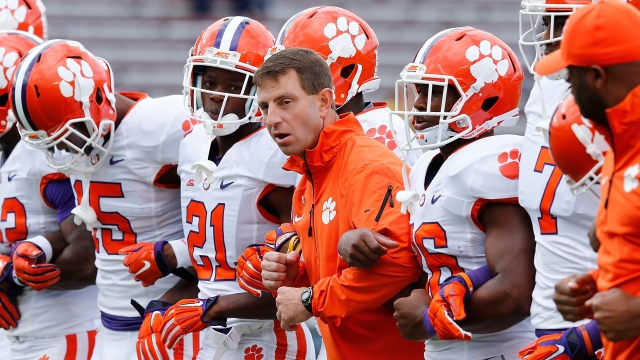 SMS
The College Football Arms Race Is Upon Us
By Carter Woodiel
By Carter Woodiel
August 20, 2016
Teams are spending more and more money on facilities that look impossibly large — until you see what their competitors have.
SHOW TRANSCRIPT

The college football arms race is upon us.

Take a look at the new football practice facility Clemson University is building. It's scheduled to be finished by Jan. 26, and it comes with some unusual amenities.

Things like laser tag, a barber shop and a room made especially for napping — all just for football players. Don't forget the $55 million price tag.

Why is Clemson doing this? Simply put, everyone else is doing it. College football isn't just about winning on the field, it's also about getting the best recruits to come to your school. And if an in-house bowling alley is going to help, then schools are going to get one.

An analysis from the Washington Post found 48 big-time football programs spent $772 million combined on facilities in 2014 — an 89 percent jump from just 10 years earlier.

Take Oregon, often a national championship contender. The school opened up a facility in 2013 with everything from an expansive weight room to imported carpets and couches.

"There were no restrictions," architect Eugene Sandoval told Sports Illustrated. "It's more about 'where can you take us?'"

All of that was paid for by Phil Knight, a founder of Nike and an Oregon grad. Knight's influence has linked his company and his school so strongly that an athletic department official proudly called Oregon "The University of Nike."

But not every school has the national appeal of Clemson or Oregon — or the seemingly bottomless funds from prominent alumni. That means many other schools are spending more than they'd like just to keep up with the Joneses.

"We are throwing money down the drain in athletics," a professor at Eastern Michigan told HBO. "We're inhibiting the quality of education we provide."

Whether that college professor likes it or not, the arms race shows no signs of stopping – chances are when a big facility opens up, a new one at the next hot program is right around the corner.