Colin Kaepernick Explains Why He Sits Out The National Anthem 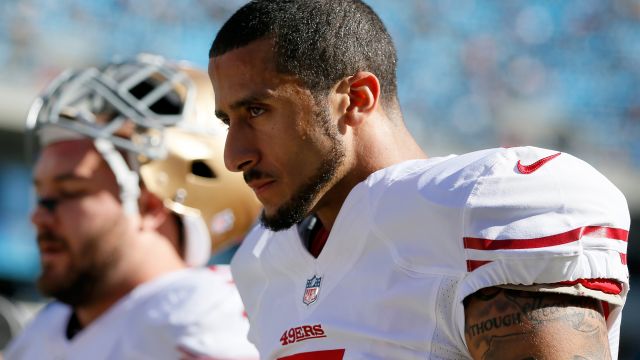 SMS
Colin Kaepernick Explains Why He Sits Out The National Anthem
By Matt Picht
By Matt Picht
August 27, 2016
The 49ers quarterback says he won't support the flag of a country that oppresses people of color.
SHOW TRANSCRIPT

For at least two preseason games, San Francisco 49ers quarterback Colin Kaepernick hasn't stood with the rest of his team during the pregame national anthem. Now, he's speaking out about why.

Kaepernick told NFL Media he wouldn't "show pride in a flag for a country that oppresses black people and people of color. ... There are bodies in the street and people getting paid leave and getting away with murder."

The quarterback went on to say he decided to be more vocal about race and police violence after witnessing months of civil unrest around the country.

Both the NFL and the 49ers affirmed Saturday that although standing during the national anthem is encouraged, players do have the right to remain seated.

Kaepernick has been struggling to regain his role as the 49ers' lead quarterback — he lost that role to Blaine Gabbert last season and spent most of the year recovering from a few surgeries.