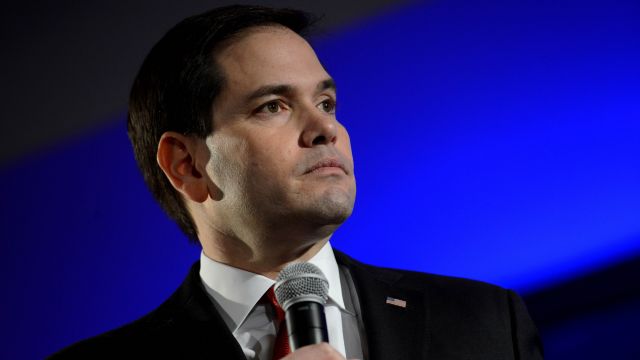 SMS
CNN Report Claims Rubio's Advisers Want Him To Drop Out Before Florida
By Briana Koeneman
By Briana Koeneman
March 8, 2016
"A very knowledgable source" told CNN the campaign is debating about whether Rubio should drop out before his home state of Florida's primary.
SHOW TRANSCRIPT

Senior campaign advisers for Sen. Marco Rubio have urged him to drop out of the Republican presidential race, this according to a new report.

According to a CNN article out Monday, "a very knowledgeable source" says the campaign is having doubts about whether Rubio should drop out before his home state of Florida's primary.

One source told the outlet, "He doesn't want to get killed in his home state," and "a poor showing would be a risk and hurt his political future."

"It's absolutely 100 percent false. CNN is doing a disservice to voters by airing that sort of reporting without even checking with the campaign," Alex Conant, Rubio's communications director, said.

Rubio has been banking on a victory in his home state's primary next week to close the widening gap between himself and opponents Donald Trump and Ted Cruz.

This video includes clips from Marco Rubio for President and CNN and images from Getty Images.