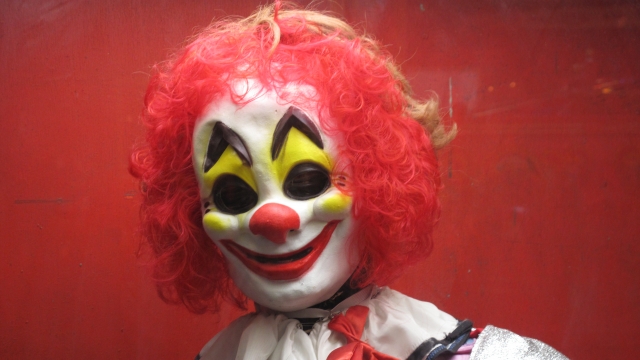 SMS
Creepy Clown Sightings Actually Started In The '80s
By Ethan Weston
By Ethan Weston
October 8, 2016
This year isn't the first time America has had a surge in reports of terrifying clowns.
SHOW TRANSCRIPT

"People living in Greenville, South Carolina, are being warned about a group of clowns that are trying to lure kids into the woods," a reporter for KTNV said.

"Some local law enforcement agencies are asking the FBI and DHS about what to do about creepy clown sightings. So I'm wondering if the president is aware of this phenomenon," a reporter asked Press Secretary Jay Carney.

Creepy clowns have been terrorizing towns across America for the past few months.

The whole thing started back in August when reports surfaced of clowns hanging out in the woods near the town of Greenville, South Carolina.

But this isn't the first time that America has faced an onslaught of clownish terror. That distinction goes to the 1980s.

First came a real killer clown. Serial killer John Wayne Gacy killed dozens of men and boys in the late '70s. He also moonlighted as "Pogo the Clown" for events around town.

Gacy's trial began in February 1980, and he was found guilty of murdering 33 people, most of whom he buried under his house and garage.

And to be clear, there haven't been any known cases of an actual killer clown since Gacy.

But the real clown panic began in Boston in 1981 when a school counselor sent a memo out to the school district warning about clowns bothering children.

Boston police began getting a ton of calls about clowns in vans trying to lure kids into the vehicle.

It only spiraled from there. Not long after the original sightings, phantom clowns were being spotted in Omaha, Nebraska; Kansas City, Missouri; and Denver, to name a few places.

As tales of the clowns spread, the stories seemed to escalate; there were more reports of people in clown suits carrying knives or machetes.

And here's the kicker: With the exception of a few cases, the clowns were only ever seen by children. And apparently no hard evidence of the clowns was never found.

Since 1981, phantom clowns have appeared in the news a few times, usually in the months leading up to Halloween. This is probably just one of those years.