Clinton's Slim Victory In Missouri Is More About Morale Than Delegates 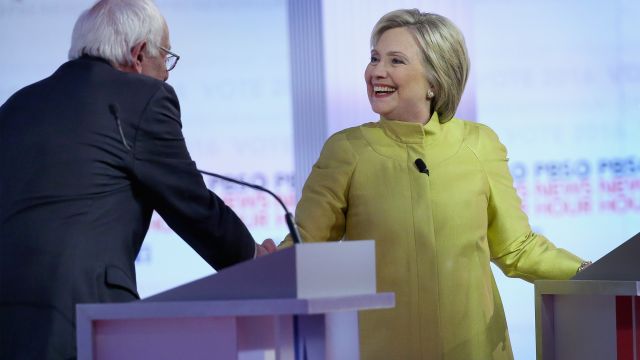 SMS
Clinton's Slim Victory In Missouri Is More About Morale Than Delegates
By Matt Picht
By Matt Picht
March 17, 2016
Clinton's victory in Missouri doesn't mean much in terms of delegates, but it does allow the campaign to claim a clean sweep of Tuesday's primaries.
SHOW TRANSCRIPT

The Democratic primary went down to the wire in Missouri, but ultimately Hillary Clinton emerged the victor. For what that's worth.

When Missouri's polls closed Tuesday, Clinton pulled ahead of her close rival Bernie Sanders by just over 1,500 votes. Her margin of victory was close enough that Sanders could have asked for a recount.

But the Vermont senator declined the offer of a recount Thursday, and it's not hard to see why. In terms of delegates, Clinton's win doesn't mean that much; she's still splitting Missouri's 71 pledged delegates more or less evenly with Sanders.

The victory does allow Clinton to claim a clean sweep of all five states that voted in Tuesday's primary. That's a slight morale boost for her campaign, if not much else.

Tuesday's voting pushed Clinton's lead over Sanders up to more than 300 pledged delegates. The next Democratic primary takes place Tuesday in Arizona.

This video includes clips from PBS.