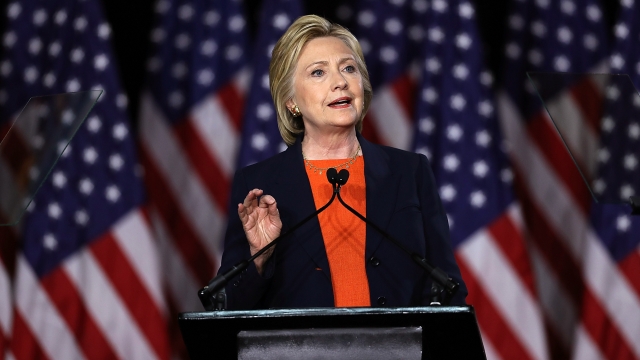 SMS
Clinton's Foreign Policy Speech Turns Into Her Best Case Against Trump
By Eugene Daniels
By Eugene Daniels
June 2, 2016
The speech was a clear preview of what the next six months will be like.
SHOW TRANSCRIPT

Hillary Clinton just hit us with a bit of a political rope-a-dope. Her Thursday speech was billed as a national security address, but instead it was about why she thinks America shouldn't choose Donald Trump for president.

Clinton did lay out her own foreign policy ideas and platform during the campaign address, but she hit Trump hard throughout, labeling him dangerous, inexperienced and ignorant.

"Being interviewed on the same episode of '60 Minutes' as Putin was is not the same as actually dealing with Putin," Clinton said.

It's a clear preview of what the next six months will be like. Clinton is distancing Trump from the GOP's standard policy platform and painting him as dangerous — for Democrats and Republicans alike. She isn't just attacking Trump's policy ideas; she's trying to delegitimize his candidacy completely.

It'll be harder for members of the GOP to believably criticize Clinton's attacks considering they're the same ones his former primary opponents have lobbed at Trump for nearly a year.

Then again, we know how well that approach worked out for all 16 of those ex-candidates.