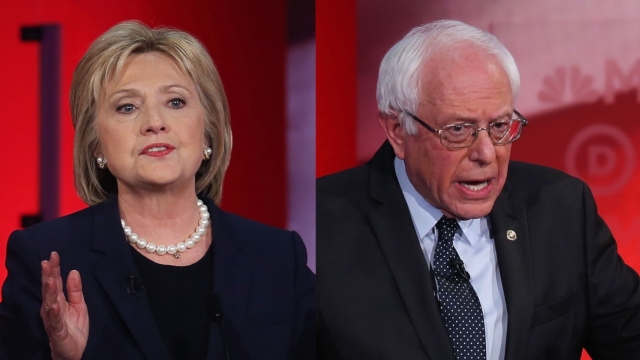 SMS
Clinton Hits Sanders On Gun Control (Again) In 'Progressive' Defense
By Eugene Daniels
By Eugene Daniels
February 4, 2016
Hillary Clinton may not fall to the left of Bernie Sanders on many issues, but she's returned to one where she does: gun control.
SHOW TRANSCRIPT

"Who is left in the progressive wing of the Democratic party under his definition?" Hillary Clinton said in the MSNBC presidential debate.

Hillary Clinton has had to defend her progressive credentials for most of the presidential campaign.

"Just for the record, are you a progressive, or are you a moderate?" Anderson Cooper asked Clinton.

And she continues to hit Bernie Sanders back on his history with gun control.

And it's one of the only issues where Clinton falls to the left of Sanders.

Sanders' votes can be partially explained by his home state.

"Guns in Vermont are not the same thing as guns in Chicago and guns in Los Angeles. In our state, guns are used for hunting," Sanders told CNN in July.

And to be fair, Clinton herself doesn't always seem too attached to the progressive label. (Video via CNN)

"You know, I get accused of being kind of moderate and center. I plead guilty," she's said before. (Video via CNN)