Clinton Broke The Glass Ceiling, But All We've Seen Is Her Husband 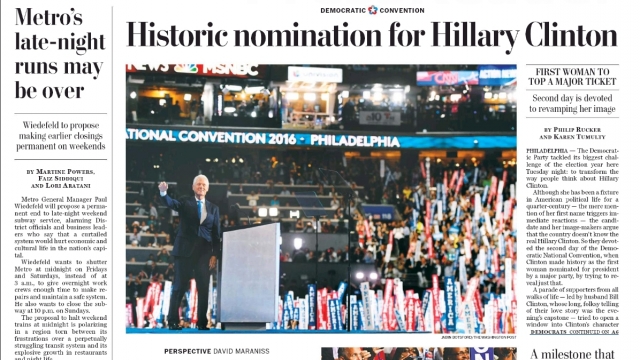 SMS
Clinton Broke The Glass Ceiling, But All We've Seen Is Her Husband
By Lindsay Gloor
By Lindsay Gloor
July 27, 2016
Hillary Clinton was named the Democratic presidential nominee Tuesday night, but most media outlets announced the news with photos of Bill Clinton.
SHOW TRANSCRIPT

"We just put the biggest crack in that glass ceiling yet," Hillary Clinton said Tuesday after she officially became the Democratic presidential nominee.

But she wasn't immediately able to crack many front pages after her nomination became official.

That's odd for a couple reasons. For one, the Democratic Party has been focused on feminist ideals.

It's also strange because so much has been said about her being the first woman nominated by a major political party.

For its part, The Wall Street Journal later changed its cover to feature Hillary Clinton, explaining, "The final edition featured Hillary Clinton once she appeared via video."

So maybe her glass-breaking entrance was just a little late.