Clinton And Sanders Are Pushing Hard For The Black Vote 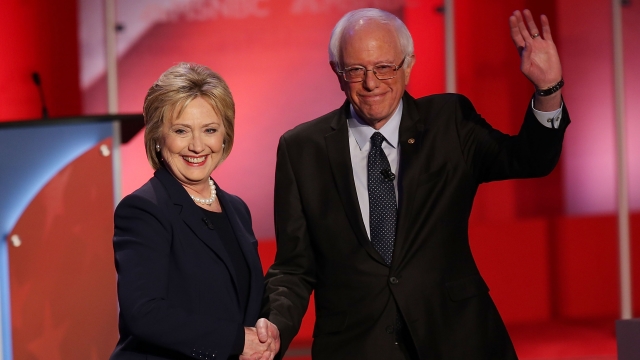 SMS
Clinton And Sanders Are Pushing Hard For The Black Vote
By Eugene Daniels
By Eugene Daniels
February 11, 2016
Both Sanders and Clinton are hoping to tap into the black voting bloc President Obama brought out in historic numbers in 2008 and 2012.
SHOW TRANSCRIPT

The Democratic fight over the very important black vote is getting pretty serious as the presidential primary moves south.

And it makes sense because African-Americans are overwhelmingly Democratic. According to Pew, 80 percent of blacks either leaned toward or were part of the Democratic Party in 2014, compared to 11 percent for the GOP.

And President Obama increased not only the percentage in 2008 and 2012 but also the actual numbers. In 2008, according to the Census Bureau, more than 16 million blacks voted in the election, 2 million more than 2004. Ninety-five percent of them voted for Obama.

That brings us to the latest battle between Hillary Clinton and Bernie Sanders. Currently, Clinton definitely has more black leaders speaking out on her behalf.

On Thursday, Clinton received the endorsement of the Congressional Black Caucus PAC. "When the issues are important to our constituents, Hillary Clinton has been there. She has been outspoken person in regards to the empowerment of Democrats and the Democratic agenda in its entirety," the chair said.

That endorsement is key and part of what many are calling Clinton's "Southern firewall." The theory is that once more diverse states begin to cast their ballots, Clinton's campaign will further the distance between her and Sanders.

But Sanders seems to know he has some work and outreach to do. He met with the Rev. Al Sharpton this week, and even though they left breakfast without an endorsement, Sharpton praised Sanders for reaching out.

To be clear, Sanders constantly talks about racial injustices and criminal justice reform but for some reason doesn't always tout what he calls his good record on race.

But civil rights hero and Clinton backer John Lewis has questioned Sanders' civil rights involvement, saying, "To be very frank, I never saw him, I never met him."

Sanders has been fighting that kind of criticism for basically the entire campaign. "I have a long history in fighting for civil rights. I understand that many people in the African-American community may not understand that," Sanders told ABC's George Stephanopoulos.

To really tap into the crucial black voting bloc, that understanding might need to happen pretty soon.

This video includes images from Getty Images and video from Hillary for America, Bernie 2016 and C-SPAN.