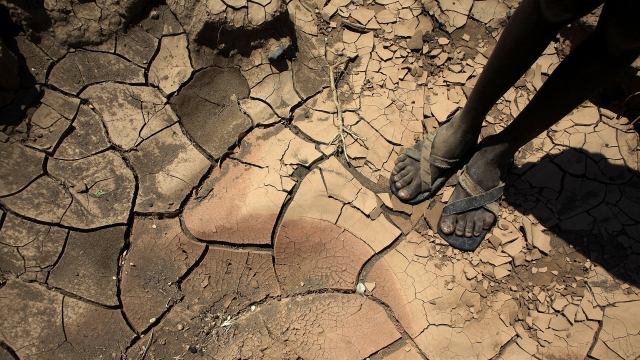 SMS
This Climate Amendment May Have Helped Out Earth In A Big Way
By Ethan Weston
By Ethan Weston
October 15, 2016
The world has agreed to another climate pact to significantly reduce one of the biggest threats to the atmosphere.
SHOW TRANSCRIPT

Technically it's an amendment to a previous agreement known as the Montreal Protocol, which is credited for helping heal the ozone layer. It may not have gotten the fanfare the Paris climate agreement got, but it's still a big deal.

And when we say major, we mean major. The agreement hopes to cut emissions of one of the most powerful warming agents: hydrofluorocarbons, or HFCs.

HFCs are in a range of products — from hairspray to refrigerators. They're thousands of times more powerful than carbon dioxide, and their use is expected to grow in the coming years.

This deal will help change that. Unlike the Paris agreement, the one signed Saturday is legally binding. The amount of HFCs the agreement plans to lower is equal to about 70 billion tons of carbon dioxide removed from the atmosphere.

There are three start dates for the reduction of HFCs under the agreement: Developed countries like the U.S. will begin in 2019, 100 developing countries agreed to take action in 2024 and a few other countries pushed for a 2028 start date.

But the deal doesn't quite go to the lengths that some environmental groups had hoped: a reduction of global warming by half a degree by the end of the century.

Half a degree is huge in terms of climate change. It's the difference between something like coral reefs adapting or dying off.

"We are witnessing here in Kigali the power and the control and the dominance of the chemical industry," Paula Tejon Carbajal of Greenpeace told the BBC.

Still, the program director from the Natural Resource Defense Council says despite the criticism, the agreement is equivalent to stopping current fossil-fuel emissions for over two years.