Cleveland Fans Lost Their Damn Minds After The Cavaliers Won 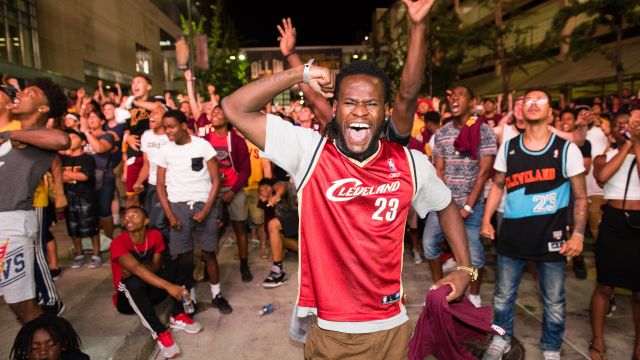 SMS
Cleveland Fans Lost Their Damn Minds After The Cavaliers Won
By Matt Moreno
By Matt Moreno
June 20, 2016
The Cleveland Cavaliers beat the Golden State Warriors in the NBA Finals on Sunday. It's the first major sports championship for Cleveland since 1954.
SHOW TRANSCRIPT

"After many years of heartbreak, we finally got a championship for the city, something to show for it. Wooo! Yeah!"  a Cleveland Cavaliers fan told WEWS after the team's win Sunday.

OK, so no one actually stole a fire truck. But Cleveland Cavaliers fans still celebrated in a big way following their team's NBA Finals win over the Golden State Warriors.

"We saw some of the streets had to be shut down because of the crowds. There were kids dancing on cars. Some people climbing on top of signs. Others getting up on a fire truck. Police obviously not too happy about that," WEWS reported.

And Cleveland fans had a good reason to celebrate.

It's the city's first major sports championship in 52 years. The Cleveland Browns won the NFL Championship in 1964 before the Super Bowl even existed.

Despite the chaotic scene, Cleveland police say there were relatively few arrests; fans, by and large, behaved themselves well enough to stay out of jail.

And from the looks of it, the Cavaliers players did some celebrating of their own.

Once the city sobers up a bit, Cleveland will welcome another big-time event — the Republican National Convention. That starts in just under a month.

We don't expect quite as much dancing in the streets, but who knows?