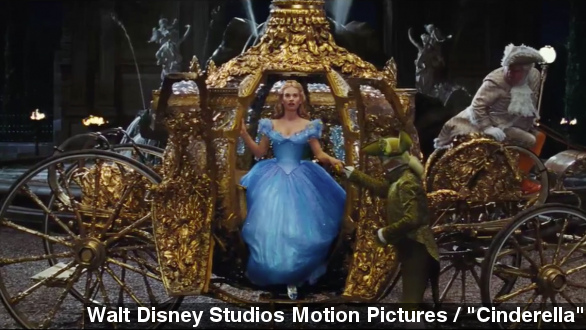 Our dreams of riding in a fairy godmother-enchanted pumpkin carriage are being reignited with Disney's latest goosebump-giving, fairy tale-retelling trailer:

"What do they call you?" the prince says.

“Never mind what they call me," Cinderella says.

It's Disney's new, live-action "Cinderella," and this version seems to lose a bit of that that "come find, save and swoop me away, prince" effect.

"They're all looking at you," Cinderella says.

"Believe me, they're all looking at you," the prince replies.

Disney's still making female-centric movies, but they've changed. Let's use some past Disney classics as examples.

And we've gathered some key Disney plot points similar to other movies that came out in decades past.

- One or both parents have to be dead or die

- Fall in love the first day you meet someone

- Be willing to sacrifice everything to be with this person

We mentioned "The Little Mermaid": Ariel's mom is dead from the start. She falls in love rescuing Eric at first sight. She has to get him to kiss her so she can get her voice back. She gives up all of her family and friends to turn human and marry him.

"Snow White": Her mother was already dead, her father then dies. She falls in love while singing a duet with Prince Charming, the same guy who wakes her up from her deadly slumber not long after ... with true love's kiss.

"Sleeping Beauty": Parents get put into an eternal slumber, so it's kind of like they're dead. She never meets her prince until he wakes her up with a kiss of true love.

"Beauty and the Beast": Mom is dead. Sacrifices everything to save her father. True love's kiss breaks his curse.

And don't forget the sound Disney advice given from token characters, too.

"Don't underestimate the importance of body language," Ursula says in "The Little Mermaid."

Let's fast-forward to today. Now Disney is going for a more headstrong-princess approach.

But they still follow some of the old Disney codes. Parents still die, but with some exceptions. True love's kiss is still there, but with a twist.

However, in 2012's "Brave," Merida's parents are both still alive. And she doesn't want to fall in love or get any of that true love's kiss nonsense. But, compared to other Pixar flicks, it didn't do as well. Did Disney stray too far from its formula?

In 2013, "Frozen," which was the most successful animated movie of all time, followed some of the old formula —  parents die early on. Then the main character falls in love immediately and thought she needed true love's kiss. But all she had to do was protect her sister.

Sisterly love. Disney threw us a curveball. Disney is doing some serious revisiting and revising of those old formulas. 2014's "Maleficent" retold "Sleeping Beauty" from a different vantage point.

Aurora's mother is dead. And it's actually the kiss of the title character, Maleficent, that awakens her.

Oh, and her dad dies at the end. Mixing up the story. Look at you, Disney.

So here's the new Disney formula:

- Parents may now stand a chance, but not much of one

Well, we think the new version of "Cinderella" looks good, and clearly, there's some classic Disney in there.