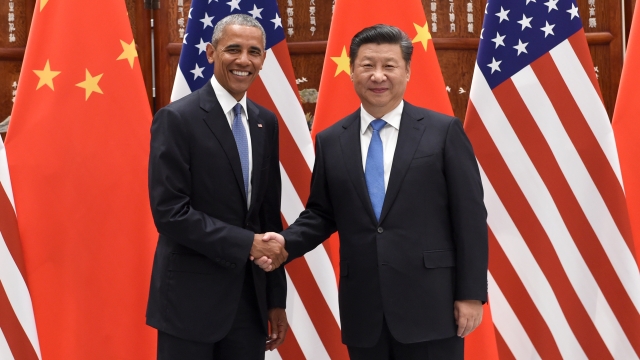 SMS
There's A Lot Of Work Left To Ratify The Paris Climate Agreement
By Ethan Weston
By Ethan Weston
September 3, 2016
The world has a long way to go before the Paris global climate agreement can take effect — even after the U.S. and China recently ratified it.
SHOW TRANSCRIPT

The world's two biggest carbon emitters — the United States and China — just ratified the Paris climate agreement at the G20 summit. But there's still a lot to be done.

The United States and China together account for about 40 percent of the world's carbon emissions.

"This is not a fight that any one country, no matter how powerful, can take alone. ... Some day we may see this as the moment that we finally decided to save our planet," President Barack Obama told reporters.

But if the Paris agreement is going to come into effect, a lot more countries need to ratify it — like 55 in total. That's when the agreement becomes internationally binding. Currently, only 26 have.

In fact, only two of the top 10 carbon producers have ratified the climate deal — the U.S. and China. Together those other eight countries produce almost as many metric tonnes of carbon dioxide as China alone.

Other countries have ratified the agreement, but after the United States, North Korea is the next largest emissions producer to have done so.

There's hope that this move might jump-start the ratification process in countries like Brazil. But other countries don't seem to be in a hurry to ratify.

There's some good news. Earlier this year, India and the U.S. pledged to ratify the Paris agreement in 2016. India is the third-largest producer of carbon emissions. President Barack Obama is expected to meet with India's prime minister during the G20 summit.