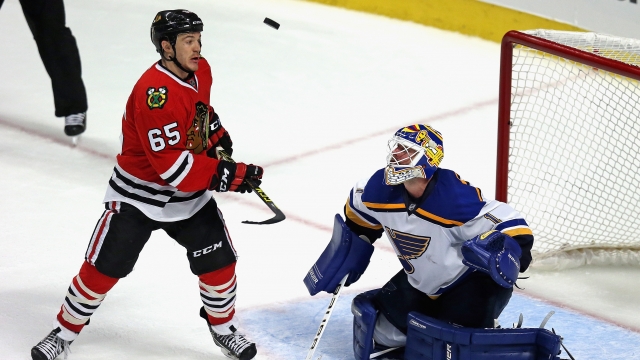 By Matt Moreno
April 20, 2016
Shaw was given a penalty late in the game. He made an obscene gesture to refs while skating to the penalty box, where he appeared to use the gay slur.
SHOW TRANSCRIPT

Chicago Blackhawks player Andrew Shaw could be hearing from the NHL offices after cameras appeared to catch him yelling a gay slur.

It happened during the Blackhawks' 4-3 loss to the St. Louis Blues in the first round of the Stanley Cup playoffs on Tuesday.

Shaw was given a penalty late in the game and appeared to make an obscene gesture to officials while skating to the penalty box.

While in the penalty box, cameras appeared to capture Shaw shouting the gay slur.

"Emotions were high. I don't know what I said. I was obviously upset with the call. Being that late in the game, it doesn't give us a chance to tie it up," Shaw told reporters after the game.

According to the NHL official rulebook (rule 23.8), players can receive game misconducts for "racial taunts or slurs" — although not every game misconduct results in a suspension.

Just a few weeks ago, the Blackhawks announced their partnership with the You Can Play Project — a social activist group focused on eradicating gay slurs from sports.

The group says it will be reaching out to the NHL regarding the matter.