Trump And Clinton May Be Rivals, But Their Daughters Remain Friends 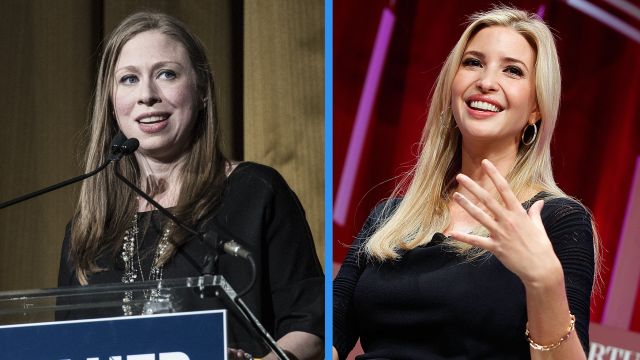 SMS
Trump And Clinton May Be Rivals, But Their Daughters Remain Friends
By Matt Picht
By Matt Picht
September 9, 2016
Chelsea Clinton told ABC her friendship with Ivanka Trump won't end due to politics.
SHOW TRANSCRIPT

Chelsea Clinton and Ivanka Trump have been friends since long before their parents were rival presidential candidates, and on Friday, Clinton vowed their friendship would survive the tumultuous campaign season.

Clinton said on ABC, "Our friendship didn't start in politics; it certainly is not going to end because of politics."

Clinton and Trump struck up a friendship through their husbands several years ago, and they have been open about their mutual admiration for each other. Their parents have been less kind.

Hillary Clinton said of the GOP nominee, "He is temperamentally unfit and totally unqualified to be commander in chief."

But as the campaign trail rhetoric heats up, both women have reportedly opted not to hang out in public any more. Any public show of amity between Chelsea Clinton and Ivanka Trump could be bad for their parents' optics.

Although they've both been drafted into their parents' presidential campaigns, so far the two women haven't crossed swords; the closest thing to a confrontation came after Clinton issued a challenge to Trump's claim that her dad would support equal pay for women.

Clinton said, "How would your father do that, given it's not something he's spoken about? There are no policies on any of those fronts that you just mentioned on his website — not last week, not this week."

Clinton also told ABC that she was less bothered by Donald Trump's personal attacks on her mother than she was about his comments about women in general.