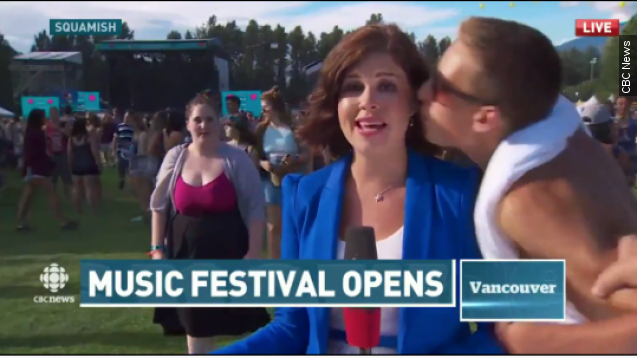 SMS
Caught Live On Camera: Kiss Causes Controversy
By Katie Link
By Katie Link
August 11, 2015
A Canadian reporter filed a police report after she received an unwanted kiss on the cheek during a live broadcast.
SHOW TRANSCRIPT

You might expect people at an outdoor music festival to feel wild and free. But one festivalgoer is regretting his impulsive actions.

"In the event that the weather is so severe that it's a risk to safety, though ..." Megan Batchelor reported for Canadian CBC News before her report was interrupted by a stranger kissing her on the cheek.

That's right, a stranger kissed a CBC reporter on the cheek during her live shot at a British Columbia music festival.

"Once the camera was off, once I could remove myself from the music festival grounds and fully process what had happened, I was angry," Batchelor told CBC News.

According to CBC News, the 17-year-old responsible for the unwanted kiss reached out to the reporter Monday via Twitter. He wrote, "At the moment I thought it was kind of a joke, then I stepped in your shoes, that's when I realized that it all was not a joke at all."

The Globe and Mail reports that Batchelor is satisfied with the apology and will let police determine how to proceed with the charges.